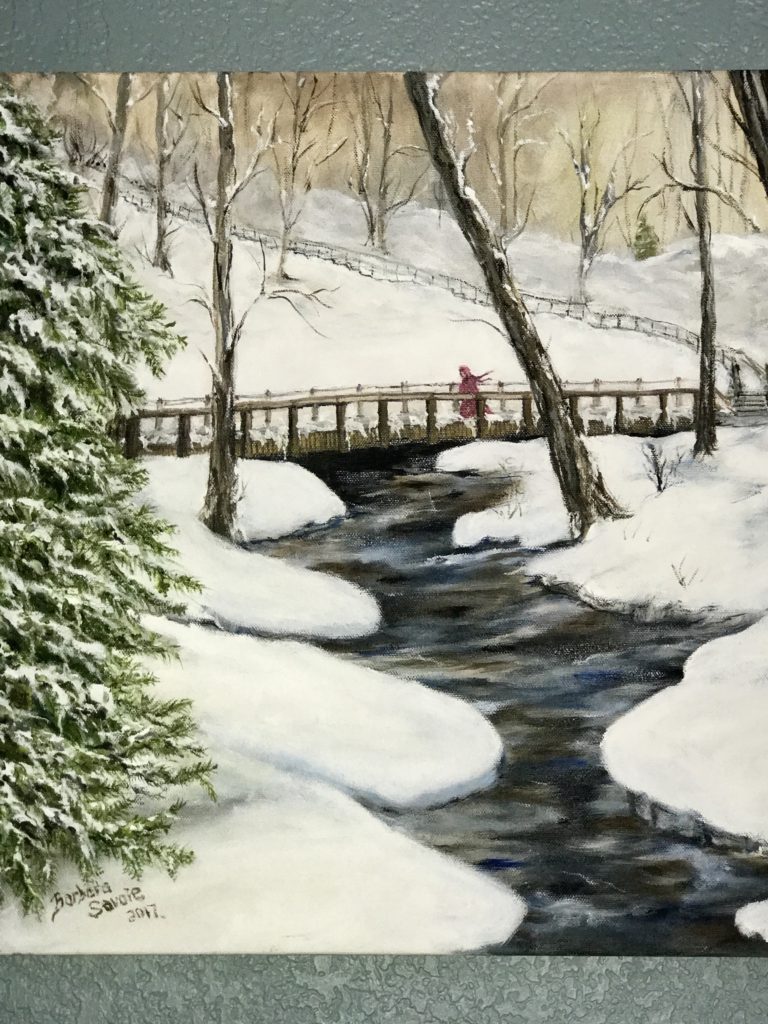 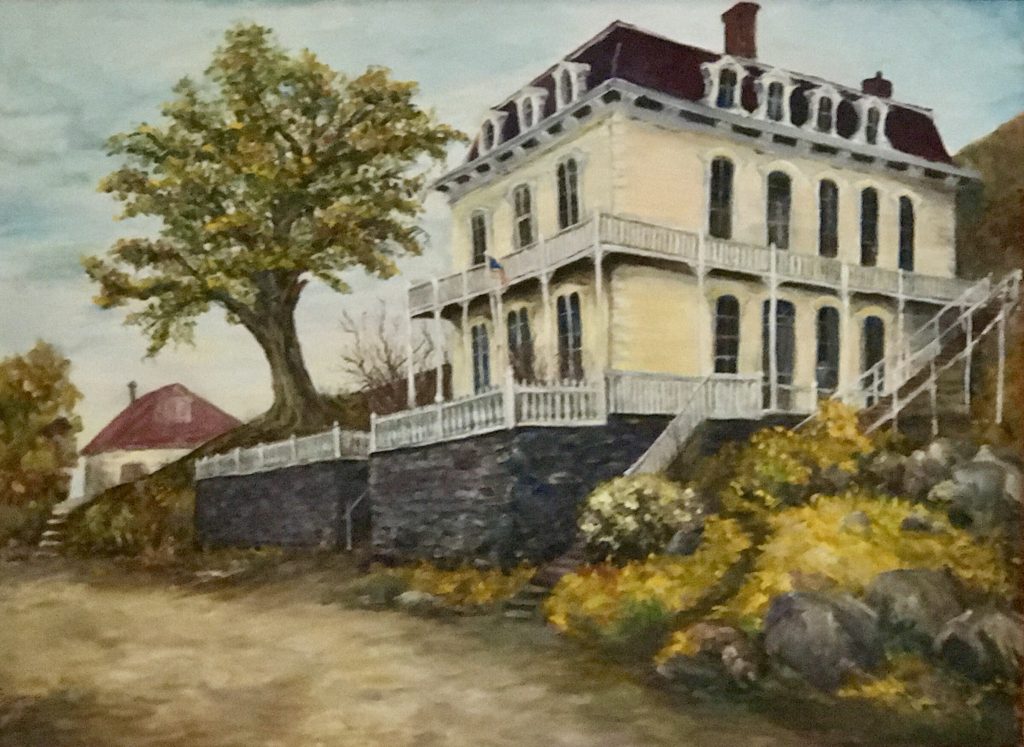 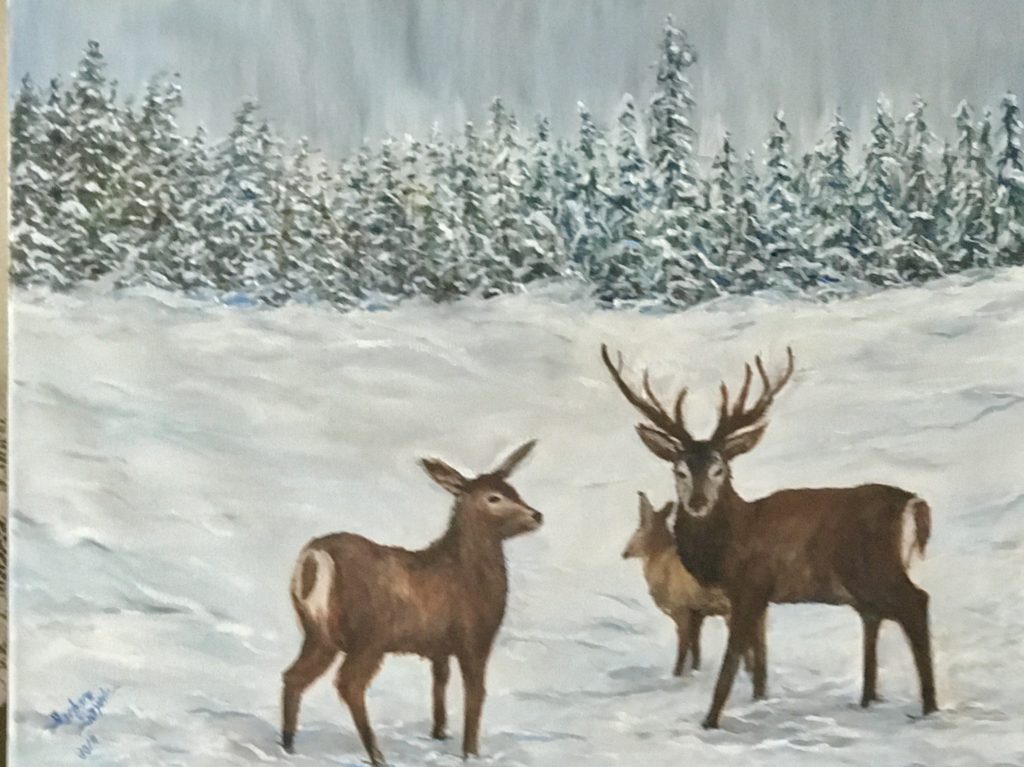 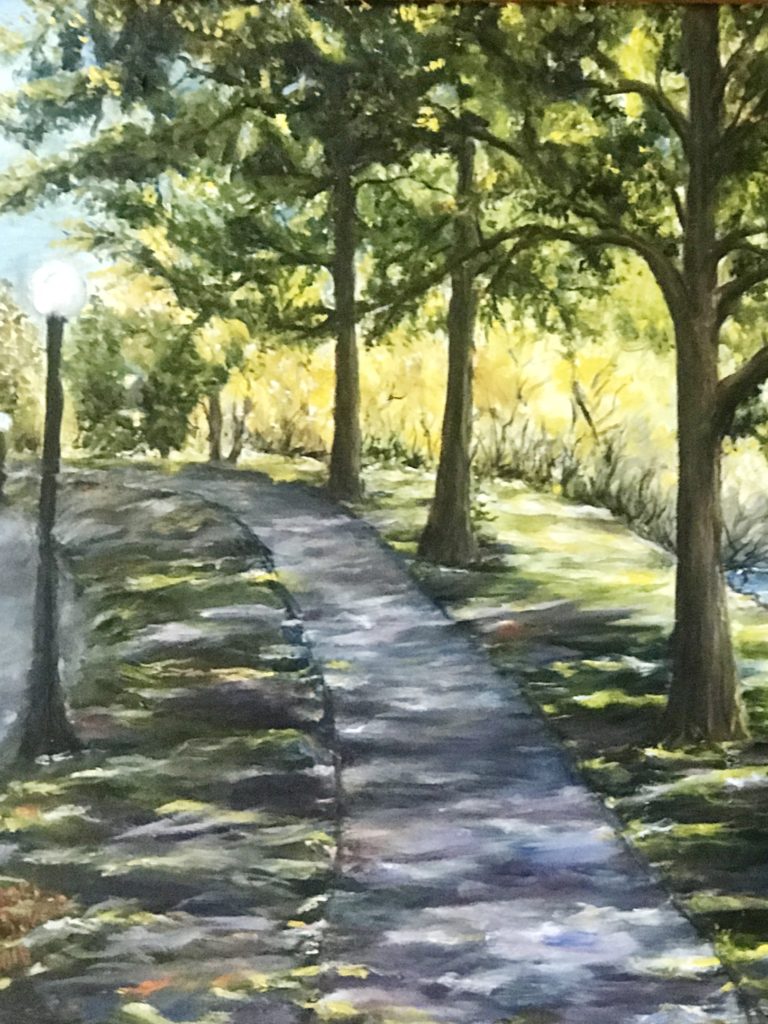 In Reno along Truckee River 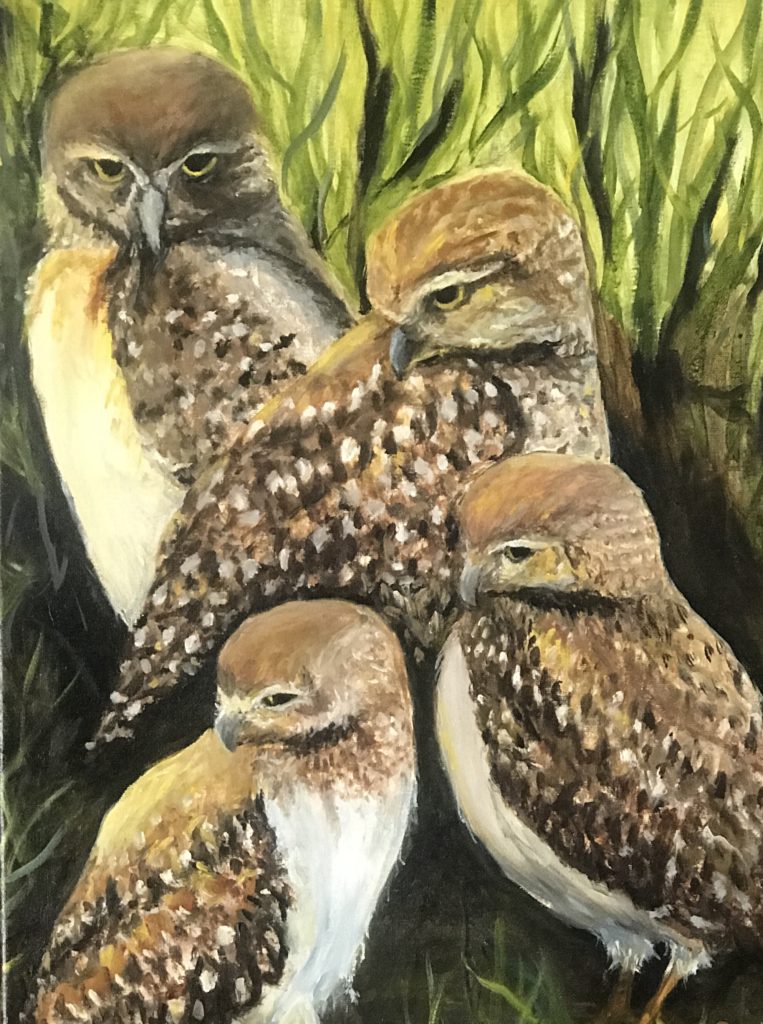 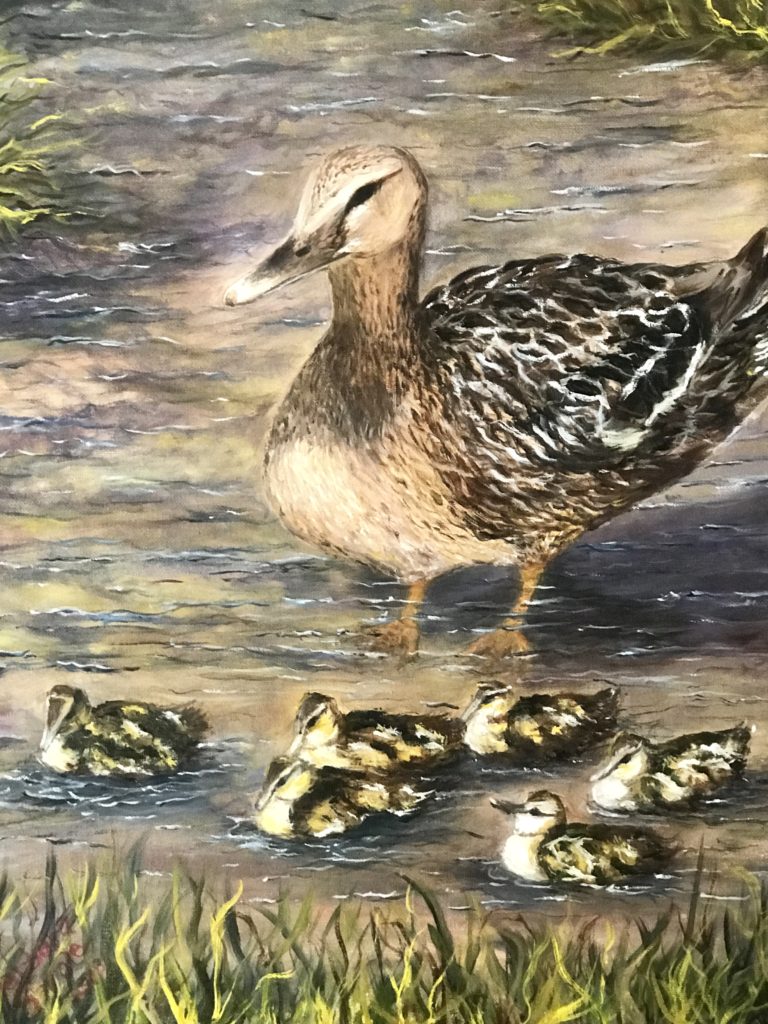 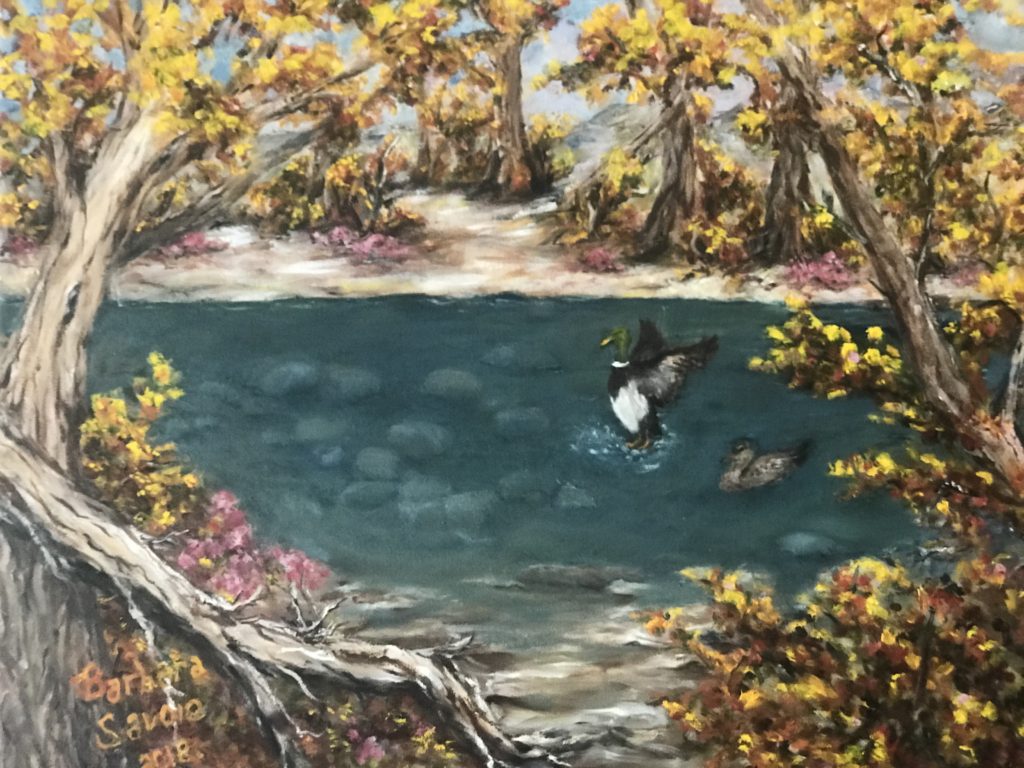 The Fall of the Carson River

(775)283-8159
Barbara Savoie was born in the summer of 1941 in the Colorado Rockies. At six months old her family traveled west settling on a coastal farm. It was not long before her family decided to relocate to San Francisco, where Barbara spent most of her youth. In her middle and later adult years, she spent some time in the northern bay area Wine Country and rural areas of Western Nevada.

It was Mrs. Savoie’s love for Western Nevada’s climate and geography along with its culture that Barbara and her children (now grown) have remained or have returned to the area. Being retired from the healthcare profession, Barbara now in her golden years, devotes much of her time to painting the scenic views of Western Nevada. In the dusty and rustic desert of an old ghost town is where Barbara has an appreciation in capturing the beauty in the restored homes and structures of times past of days gone by in the old mining town of Virginia City.

Previously having a formal art studio in Virginia City, Mrs. Savoie was commissioned by Michael Mackey, the grandson of the Bonanza King, John W Mackey. She painted a snow-covered Christmas of his family’s Victorian mansion located in Virginia City. The Christmas tree being symbolic to the cultural values and traditional norms in America with its shiny garland wrapping and sprinkled tensile to its electric bright lights and hanging bulbs can be seen in many windows across America. The symbolism is that of inner warmth and love for our family and friends that can be seen through the windows of many homes in America. Barbara has captured the essence of this warm family tradition for Mr. Mackey as an observer of her work can gaze at the brightly decorated tree within his home. Mrs. Savoie already having a creative and natural talent in the Fine Arts, received art instruction from Virginia Davis and Mark Tom Kin’s of Nevada. With continued instruction and experience she has also been commissioned to paint a small town off the coast of Italy for a lady client, who intended to give it as a gift to her husband for Valentines Day. Whether a painting of your family home in a Christmas scene and/or a painting intended as a gift for a special occasion, Barbara’s paintings are symbolic to our culture and can be significant to the viewer in relation and/or in reflection to their thoughts and interpretations.

Most recently as a gift to her daughter and granddaughter are two separate paintings of a woman crossing a bridge on a snow-covered day. The path before the bridge is long and each woman is at a different place on the bridge as to represent each pivotal point in the women’s life. The body mechanics of each woman can be seen as walking and/or running. This is uniquely symbolic to the time period in each woman’s life. It is representative to a woman’s life stage within her life path. The third piece in this collection is the painting of another woman, who is also walking and furthest on the bridge. Each woman going across the bridge is catching up to the time interval within her life’s path to the one before her as the next shifts further across the bridge. It would deny the laws of physics for a daughter to reach the exact point in time in her mother’s life when her mother too had experienced the many things women experience throughout the life stages. In reflection, this would give daughter’s a better understanding of their mothers when they reach that same point within the bridge in this continued life cycle of growth and understanding, yet never really understanding until we cross the bridge perhaps. Regardless, the many social and environmental aspects that surround women are contributors to how mothers raise their daughters in any given time and/or place in society. A mother’s multitude in extremity of emotions are complex and always present and felt inheart.
Being in her golden years, Mrs. Savoie enjoys the time and serenity she devotes to each one of her paintings. She continues to accentuate on her love for painting. More importantly to enjoy the challenges, the joy and happiness of painting this beautiful world of ours.
Written By Granddaughter,
Chistina Huttman